Unbelievably this year is the 50thAnniversaryof one of the greatest British Films ever made – The Italian Job.

How many of the screens in the 1969 Italian Job film can you remember? Which would you say are the most iconic? Which scenes have never been repeated in any other movie? Which would you like to have driven yourself? Epic fun, timeless joy.

All the Mini’s in the Italian job were Mini Coopers. The stunt drivers made these Coopers ‘fly’ around back streets of Turin before they jumped into the Ford Thames Trader minibus singing, “This is the self preservation society,” you know the words, then sing along.

We have so much to thank John Cooper and Paddy Hopkirk for, turning this revolutionary car into the Race & Rally & Film icon, everyone wanted drive and own. We all love the Mini. 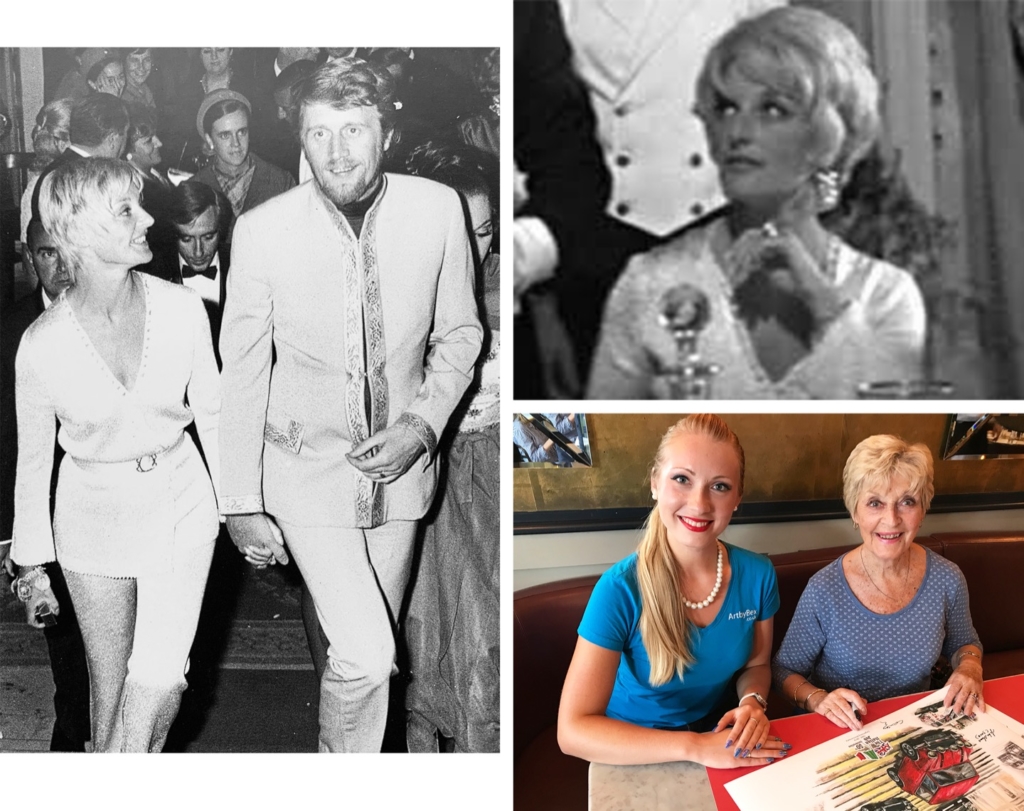 So what has our well known artist, Bex, created to celebrate ‘The Italian Job 50th ‘anniversary?

“I’ve painted, what I feel are the most memorable screens from the Italian Job Movie and I’ve brought them all together into a single exclusive artwork printthat captures the fond memories of the Mini in this film caper.” 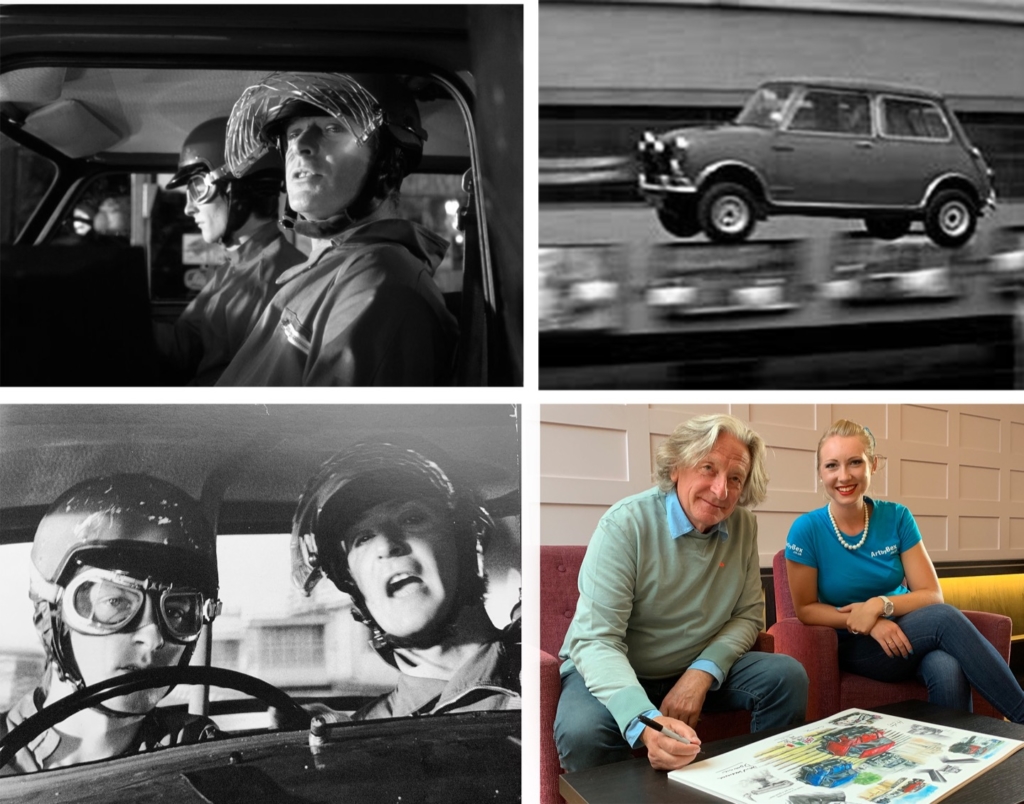 So what does this Exclusive 50thAnniversary Artwork feature, Bex?

“The scenes of the Mini Coopers driving down the Cathedral steps, driving across the weir, through the sewer, in the shopping mall and many more. I’ve painted some in colour, others are drawings and I brought them all together into this single exclusive artwork printall created, with my heartfelt passion for the Mini that encapsulates the feeling of this fun film, to keep alive forever.” 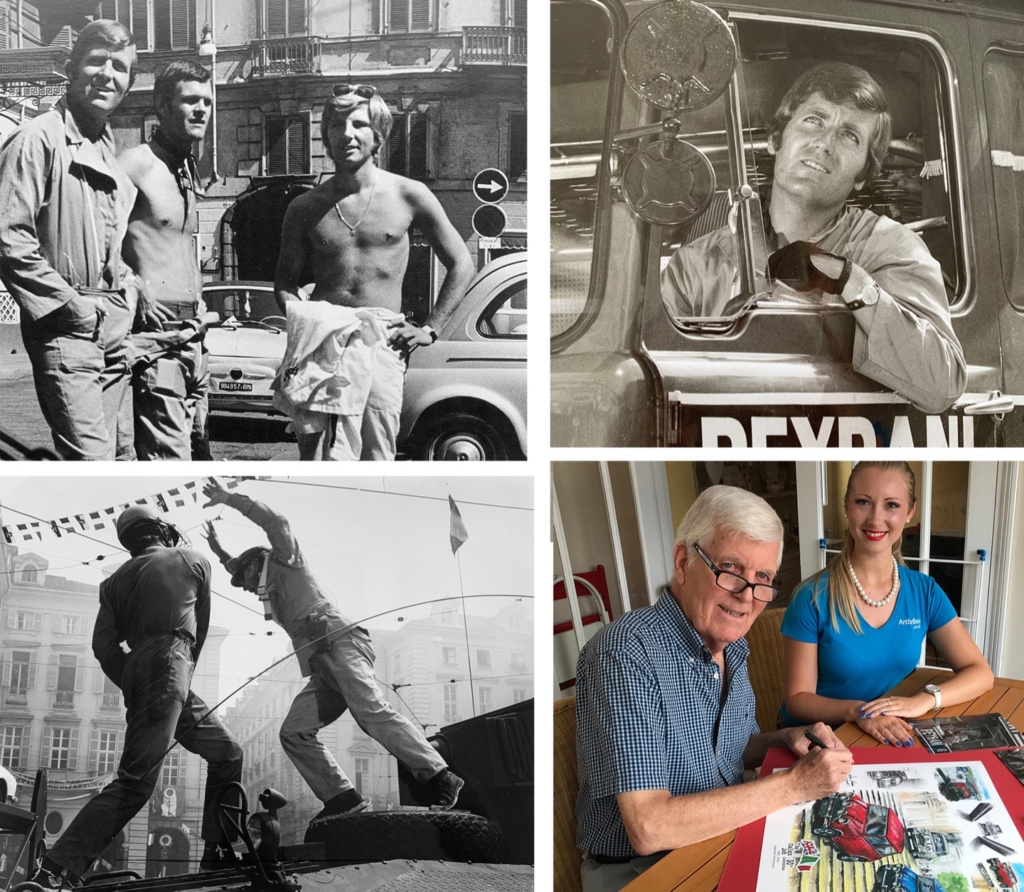 Why the Italian Job Movie Bex?

“Because it’s the greatest Mini movie of all time. The original film is still the best and I wasn’t going to let the 50thanniversary pass by.”

What makes this latest artwork so collectible Bex?

“I’ve put my heart & soul into this exclusive artwork and I’m so pleased that my artwork prints have been supported & signed by such celebrities who acknowledge my work.

Each unique artwork within this collection is hand signed by Dominic the Red Mini Driver, John Morris who played Michael Caine’s Stunt Double and Gang Member Dave as well as Hazel Collinson, Wife of the Movie Director.

I’ve created only 50 prints to celebrate the 50thanniversary, truly exclusive and collectible” 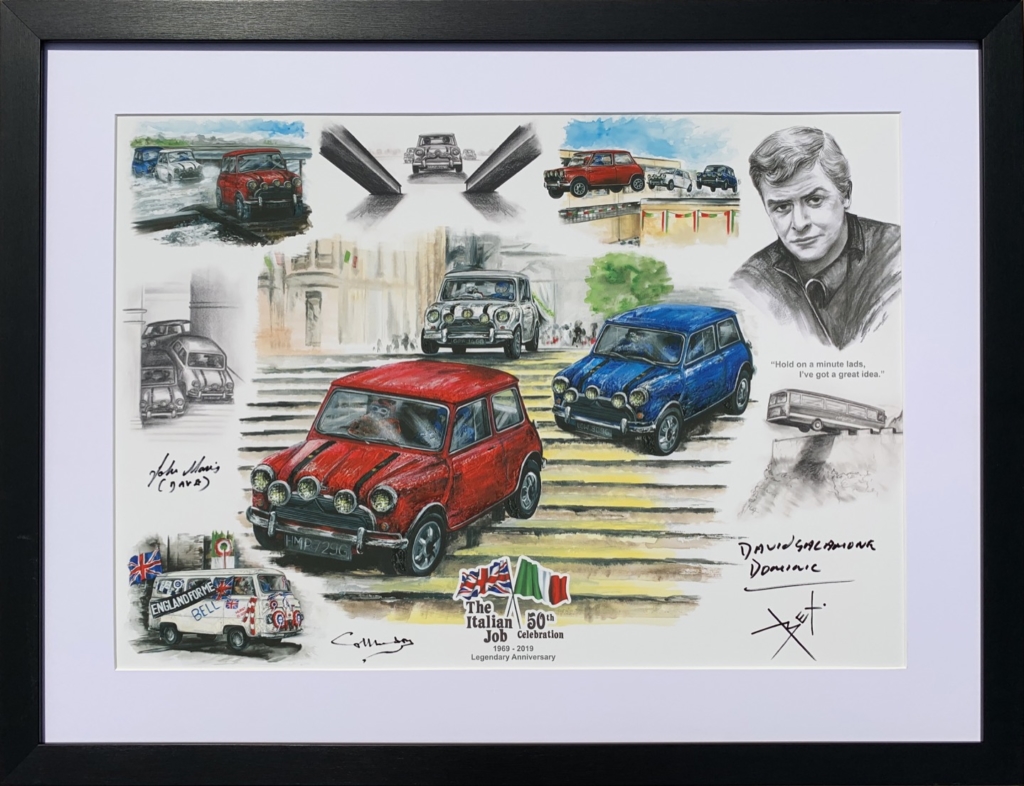 “I’ve also created a single exclusive artwork print of the 3 Mini Coopers escaping through the Turin sewer. Wow, what a scene!

Not only have I only created 50 of these prints but they’re also signed by both John Cooper and Dominic (David Salamone) who was the actual stunt driver of the Red Mini in the Italian Job Film.”

Want to know how you can own one of these Exclusive 50thAnniversary Artwork?